"What? In the middle of February?" Yes, because the Japanese school and business years run from April to March. So, now she has 6 weeks of free time before she heads off to college (from home, by train, almost 2 hours each way...)

Did I mention it was on Tuesday? You know, that day after Monday, one of those 5 days when most people work? Yep, and I didn't go. Does that make me father-of-the-year? Maybe, but neither did most other fathers, nor quite a few mothers, actually.

It kinda surprised me. Kindergarten graduation is a big deal, held on Saturday so both parents have a chance to come and watch their 6-yr-old sit and fidget through a series of speeches before heading back to their classrooms to receive a graduation scroll (and you thought it was hard to sit through your high school graduation). Mothers dress up in their best kimonos, having their hair pinned up; fathers come in suit and tie. Mothers beam with pride, and sob with joy.

Elementary school graduation ramps it up another notch, having the kids parade in by pairs to "Pomp and Circumstance". After the requisite speeches (they do love their speeches here), they get called up to the podium one-by-one to receive their scrolls, bowing and holding the scroll straight out in front of them. Mothers sob with joy, fathers beam with pride.

Junior high school was more of the same, adding in the parade out through the grounds to the front gate, while mothers sob with joy. I was just about the only father there.

But high school? Nope. Guess they ran out of ideas or something. There were a few speeches, then each teacher read out the names of their students while the class stood at attention. Then the class shouted "Hai!" (basically, 'here!' in this context) and sat down again. That's it. All done.

Then my daughter came home, ate a quick lunch, and headed to the beauty salon for a color job, while some of her friends got permanents (they aren't allowed to do either, or even to wear makeup, while in high school). There will be a lot of frizzy-haired young raccoons with light brown or red hair walking around by the end of the month....
Posted by Japanat at 2:10 PM No comments:

It's a beautiful day in the neighborhood...

On January 9th, I was on the road again, taking a quick jaunt back to Colorado, and I couldn't have picked a better day to travel. Mostly clear skies, 50 degrees, and beautiful young ladies everywhere.

Now, before you run and tell my wife what I just said, let me say that she was once one of those ladies. Wait a minute, that didn't come out right.
I meant to say that about 20 years ago....

Nope. That's no good. Hmmm.... Let's back up on that one.
The 2nd Monday in January is Seijin no Hi (Coming of Age Day), when 20-yr old Japanese celebrate becoming adults by attending ceremonies in their hometowns in the morning, then going out in the evening to drink (legally) with friends or heading to the karaoke studio.

The young men wear suits or hakama (a kind of kimono pantalooon) with a tunic. But the young ladies are truly elegant - their hair is styled, pulled back/up and decorated with colorful accessories, then they don gorgeous, colorful, flowered kimono with ornate obi belts and wooden sandals. 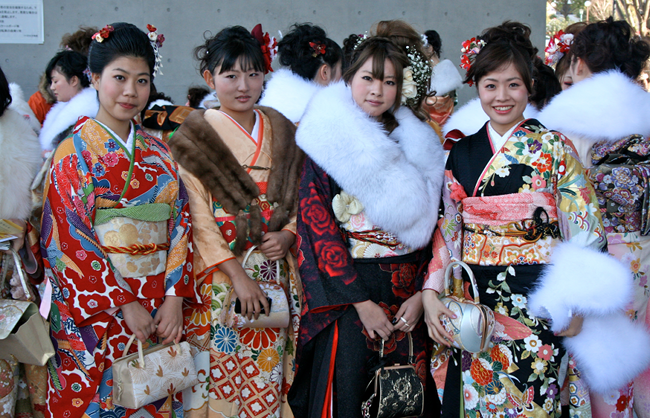 My train to Osaka was filled with young ladies heading to Kobe or Osaka to meet friends and head out on the town. Sure beats drunken salarymen.

(Kinda looks like a scene in The Bachelor, that movie with Chris O'Donnell, doesn't it? "Aaauuugghhh! They're chasing me....")

Oh, and FYI - my wife is still gorgeous in a kimono (or blue jeans, or whatever). 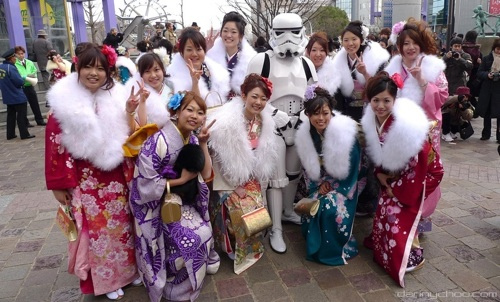