Is Japan a group-oriented society? Does a bear shit in the woods? Eh-hm, sorry...

Judge for yourself. They have taken a "character building" free-for-all where "big kiDs knOck other kiDs silly in a GamE of Be ALL you can be", - you know, DODGEBALL (or "school-SPOnsoRed Terrorism", as the smaller kids called it), and made a team sport of it.

I gotta confess. As a runty 7th grader, I hated the game. Then in 8th or 9th grade, the teenager's love of stupid risk came to my aid, and I learned to revel in dodging near misses moving at light speed, and wanted to brain the bigger guys who'd kick my scrawny little ass if I had ever done such a thing out in the real world, but offered me grudging respect as they writhed on the ground from a well-placed (aka lucky) groin shot. In other words, I embraced sado-masochism. We should have all been wearing spray-on latex, we were such sadists.

And rules? 'We don' need no stinkin' rules!" If you get hit, you're out. If you catch the ball, the other guy's out. If you could draw blood, like Mr. Hokanson sometimes did, leaving little red bloody welts on someone's leg or chest, you scored "man points". Add anything to that and you take away from the Cro-Magnonism of it all.

But in Japan, dodgeball is a whole 'nuther critter.

Take a volleyball court (remove the net, please, before someone sections their face into little bloody squares, skittering across the floor). Now put 7 members of each team inside their respective sides. Then take the remaining 3 members of each team and put them outside the other three lines of the opponents court (draw another line 10 ft behind them - this is the out-zone). This game just became a lot more complex. Toss the ball to another player on a different sideline, and watch the whole team pivot in response. Do this a few times, then nail the one who turns slowest. Oh, and if you are a center player who has been knocked out, you can get back in by knocking someone out from the sidelines. Only the 3 original 'out' players can't get back in. Catching someone's throw, while ensuring that you aren't out, doesn't knock out the thrower.

This makes for a game which needs an Ender Wiggin to plan properly. Neighborhood teams practice for months before our town tourney, then meet in May at each elementary school to pick the school champions. Elementary school, guys, when we could barely handle our rules in junior high!

Then last weekend was the town championship. The top 3 teams in each age group (1st-2nd grade, 3rd-4th grade, 5th-6th grade) from each school met at the town gymnasium and duked it out. My son's team (5th-6th) took 3rd prize.

Check out a few photos: 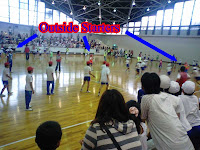 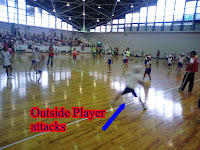 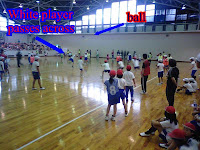