It's easy for an average-sized American guy to start feeling cocky when they arrive here. I was just shy of 6" and weighed a fit 180 when I came here (about average for Colorado, I guess [unfortunately a fair bit bigger than that now...]), the average Japanese guy is about 3-4 inches shorter than that, and lean. I'm talking 5'8" and maybe 135 lbs. Whereas most of the guys I worked with when I was a fitness manager were wearing 44-48 inch jackets and were probably 8 inches deep, many of the guys here would be lucky to fit a 38 and are only 4-5 inches from back to breastbone. Makes you feel like a giant, it does.

Until you look at general levels of fitness, that is.

Every school in Japan has a Sports' Day festival; it's very similar to Field Day at my elementary school, with lots of running and other strength events, but parents and grandparents all come to watch. There are relay races, sprints, cheering contests, dances; every student participates to the best of their ability, and their parents all come to cheer them on. And having 4 kids who go to 4 different schools, I have gone to 4 Sports' Days this month - talk about a scheduling nightmare!.

Last Saturday was my youngest son's Sports' Day, which started at 9 am, with all kids listening to a short speech, then doing calisthenics together to warm up. Then 5th and 6th graders ran 100m dashes, followed by a group dance by the 1st and 2nd graders. Then the 3rd and 4th graders ran, with the 5th graders then helping the kindergarten and preschools kids do their activity. Now the 1st and 2nd graders ran, the 3rd and 4th graders did their dance, and the PTA had a tug of war. Last were gymnastics and human pyramids by the 5th and 6th grades.

After lunch came all the relay races, tug of war for the middle grades, and 4-person chicken fights for the older ones. They actually look like chariots, with three kids in a triangle formation carrying the fourth, who tries to pull the hat off their enemy, or knock them off their chariot, which can be pretty brutal, even with teachers trying to catch them as they fall (sorry, I just can't figure out where to split that sentence - some teacher, huh!).

But the general fitness level really struck me when I watched my second daughter's JHS Sports Day. The boys were making assorted pyramids, starting with three-person stacks, and culminating in an insurance company-nightmare 7-level human pyramid. And at her school, not one boy was fat. Not one! Usually there are one or two boys or girls who are large or even really big. But not one boy at her school is (I am, of course, immensely jealous...). Most of them play sports in after-school clubs, much like US high schools, but they don't have seasons - club is a year-round activity, and you specialize in one sport, then play it 3-4 hours/day, every day, including most Sundays and holidays. I think my daughter has maybe 15 days off this year.

So don't get cocky if you find that the average Japanese guy is smaller than you and doesn't have the macho guns and pecs straining his t-shirt, which probably just hangs off him. The little sh-- probably is much fitter than you are, and if they are/were in the judo club at school, might just kick your heinie. 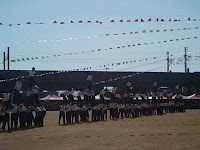 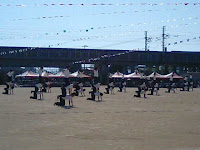 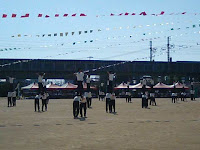