A blog about the differences in perception and the everyday reality of life in Japan and English teaching to Japanese from a man who has spent the last 20 years in Japan, and a slightly outside perspective of the USA from an American who loves his country, but is neither blind to her foibles nor a rabid intellectual who only sees negatives.

Whew, what a mouthful!

What does it mean, exactly? Well, I’m just an American guy who ended up in Japan pretty much by accident, liked some things, disliked others, and came to terms with the cultural and lifestyle differences that make life overseas both challenging and rewarding. I’m not a Japanophile whose whole life has been centered by OnePiece, DeathNote, Sailor Moon or any other Japanese manga or animation. Nor do I run around in cute little costumes and frequent maid bars. But neither am I a Japan hater like you sometimes see, who is so full of vitriol that you wonder why the hell they don’t just get their complaining asses on a plane for home (where they probably bitch and moan just as much).

So, an introduction. I was working in Sports & Recreation in Denver back in 1990 when I felt an uncomfortable urge to head for new surroundings. So, instead of riding my bike down to the nearest mall for some shopping shock, instead of getting a job in Califor-ni-ya or New Yawk, I applied for a job with an English conversation school in Japan.

3 weeks later and I had the job and was waiting for my visa to come through. Next thing I knew, I was leaving LAX, Holst’s The Planets - Mars pounding through my little cassette player (dun, dun, da-da-da-dun, dun), and heading for the earthquake capital of the world…

What an adventure! Flying into Narita on a packed 747, I stood out like a blonde sore thumb on a black-haired hand (no hairy-palm jokes, please!). I managed to catch my connecting flight to Osaka, sweating profusely all the way (I’m from Colorado - we don’t know humidity from squat!). Think Deliverance, think swimming pool without walls! We were met at Osaka airport, and then proceeded to take the bullet train for another 2 hours.

Okayama was beautiful, except for the power lines everywhere, and the people were incredibly friendly. We were told to take Sunday to explore, and they’d see us Monday morning. Can you say “Sink or Swim”? Can’t read a lick, couldn’t do more than count to 10. But joy of joys, the menus have pictures! “Let’s try this!… That was good! Let’s try that!… Ooops, my bad…” 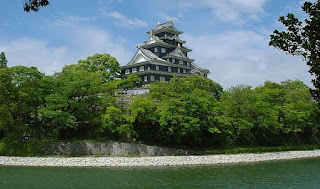 Went to the castle, which is really impressive from a distance.

Got close and saw that it is made of concrete; we bitched a little about that, until we realized why it had been rebuilt. (Americans looking uncomfortably at each other for a moment, Canadians proudly showing the flags sewn onto their backpacks)

After a week of training, we went out for a ‘graduation’ dinner, and I ate sushi for the first time (Colorado, remember?). And we ended up partying with damn near everyone in the restaurant. A big table of college students started sitting with us, inviting us to sit with them, buying us beers, and seeing what strange wigglies they could get us to eat. If only I could have treated them to an order of Rocky Mountain Oysters in return. (Note: Japanese food doesn’t have much fiber; you’ll go days without… going)

exercise for the reader: read the Wikipedia definition for “Rocky Mountain Oysters”. I’ve eaten them many times, but that definition made me cross my legs and cringe….
Posted by Japanat at 11:30 PM

Email ThisBlogThis!Share to TwitterShare to FacebookShare to Pinterest
Labels: Japan life, The Beginning