After I'd been in Japan a week, I was sent to my school in a small city to the west of Kobe called Kakogawa (I was to be the 1st male teacher at a school that had only opened the previous year). Now, small in the Kansai area is a relative term, Kakogawa having 260,000 residents at that time, which was larger than all but 2 of Colorado's cities: Denver and Colorado Springs. But only 4 non-Japanese outside of the entertainment industry.

On Saturday I got off the train into a little white-painted wooden station, surprisingly small for a city of 260K, then found the exit, and one of the staff from my school waiting for me. Her English was very good, which certainly helped to ease my nerves over the transition. She was also cute, which is always a good thing. After showing me the school, she and the manager asked me to wander the city until closing time (about 8 hours later...), at which time they'd take me to the hotel.

Cool. I was so hungover from the previous night's fun with strangers (see 1st post) that I just wanted some quiet, a Pepsi, and a nap. So I went looking. Hmmm. No Pepsi. I felt like someone at a backwards SNL Olympia cafe, "No Coke. Pepsi". Turns out Pepsi had failed in their initial product launch and pulled out of the Japanese market (they came back in a few years ago, and are doing reasonably well now).

After sitting in a gazebo in a little park outside city hall, I decided to do some exploring. Kakogawa has a pretty neat shopping arcade, 2 streets that meet in a T, full of little shops and the occasional fast food shop. One shop had octopi stretched out on a stick frame to dry, like little brown kites with eyes. There were many little shops selling everything from silk kimonos to party goods to home shrines. There was also a huge, brand-new department store which offered prepared delicacies in the basement, and 6 floors of expensive fashion and accessories above.

You see, the first 3 months or so in country are an adventure. Even the littlest things can trip you up, and leave you feeling like an idiot until you conquer them, at which time you feel like Rocky on the steps in Philly. Like talking to cute girls. Like getting on the right train, going in the right direction. Like using the toilet... 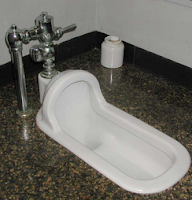 A traditional Japanese toilet is set in a slightly raised platform, is oblong with kind of a shield on the far end, and definitely not intended to be sat upon. 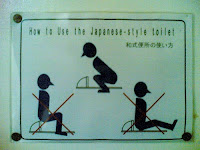 Eventually, I did figure out the way it was supposed to be used, but I had a dilemma. Call me slow, but where do your pants go? Don't drop them, then don't drop anything else... Drop them to your ankles, you'll make a deposit, not a withdrawal... I'll be damned if I'm gonna take 'em all the way off, cuz I'm sure the Japanese don't. Balance is a bit of an issue too, you know? Taking a dump, Weeble style ("Weebles wobble, but they don't fall down" - hopefully). And really, just who are you gonna ask? The beautiful girl walking by? The old lady? Eventually, feeling like a total idiot, I figured out how to keep my jeans bunched above my knees while doing my duty. Did I mention that I felt like a total idiot? Maybe I should mention it again. And again. And again.

Until I saw this: 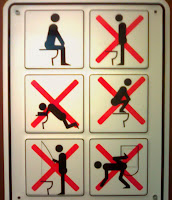 instructions on how to use a western toilet ;-)

That last pic cracks me up! What exactly is he supposed to be doing, anyways?


Next time: being Heinlein's Stranger in a Strange Land
Posted by Japanat at 12:21 AM